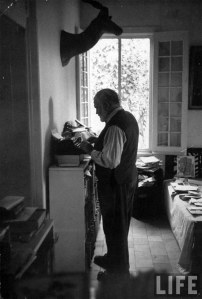 Virginia Woolf had one. Papa Hemingway had one. I’ve been contemplating one myself for a few years now, but not because they had one, and not because they’re trendy. I want a standing desk because they are better for one’s health, and because when I sit down to write, I can lose hours and arise, shall we say, stiff and sore?

Did you know that standing burns up to an extra 50 calories an hour? That alone would sell me on one, let alone the fact that I was sick on the couch the last two days (mostly) writing and that the last thing my restless body wants is to sit ever again!

I have flirted with a writing desk: there is a table on our sun porch that kinda works as one, except I’m afraid that if I get used to it I won’t go to my favorite cafe anymore, and that I might not shower or ever get out of the house, you know, the whole recluse thing. Because I could be that kind of writer. (That is NOT a good thing!)

If I thought no one would make fun of me at my favorite cafe, I’d bring in a box or a milk crate and use it as a standing desk,but I would feel as if I were at a lectern and I am afraid they might think that of me as well. So I may just have to stand at work, rather than when I write. Well, a woman’s got to start somewhere, hasn’t she?

2 thoughts on “Standing Desks and Other Affectations”